Home News Feed Two Fulani Herdsmen Beat Their Own Colleague To Death
Facebook
Twitter
WhatsApp
A Fulani herdsman has been brutally beaten to death by his own colleagues who pounced on him in a Jigawa State community. 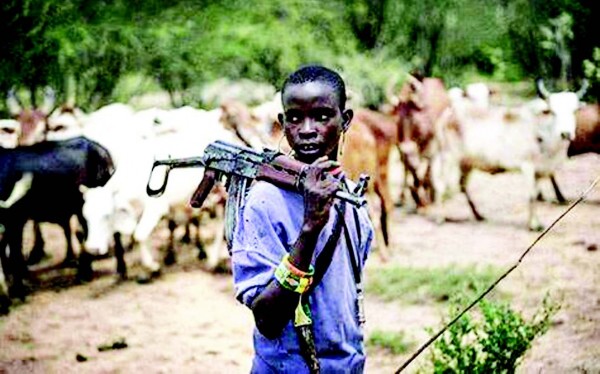 Two herdsmen have been arrested by the Police Command in Jigawa State over the death of their colleague in Gagarawa Local Government Area of the state.
According to Vanguard, DSP Abdu Jinjiri, the Command’s Public Relations Officer, confirmed the arrest to newsmen in Dutse, yesterday.
Jinjiri said the suspects, aged 22 and 23, and who are residents of Gangara Fulani settlement, were arrested on Saturday.
He said the suspects allegedly conspired, beat up one Manu Isa of Maidamisa Fulani settlement with sticks, which led to his death.
According to Jinjiri, “the suspects conspired and beat up one Manu Isa with sticks until he was down.
“When the Police got to know about it, they rushed to the scene and took Isa to hospital, but unfortunately he died after two days.
“And it was speculated that the suspects beat up the deceased over a girlfriend. But detailed investigation is ongoing to ascertain the genuine reasons for their action, after which they will be charged to court.”
It will be recalled that on September 9, the Security Committee of the Gagarawa Local Government, where the incident occurred, banned Fulani traditional ceremonies and other festivities in the night.
The Chairman of the Local Government, Alhaji Ibrahim Ya’u, announced the decision at the end of the council’s security meeting.
Ya’u explained that the action was taken following frequent cases of unnecessary quarrels and fighting during such ceremonies.
He, therefore, warned the herdsmen to strictly comply with the directive or face the full wrath of the law.