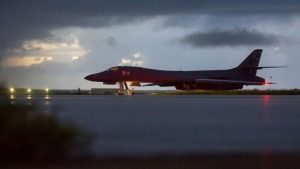 The Pentagon has confirmed that US bombers have flown close to the Eastern part of North Korea coast to demonstrate the military options available to defeat any threat that is been put up against them.

It said the flight was the farthest north of the demilitarised zone between the Koreas that any US fighter jet or bomber had flown in the 21st Century.

At the UN, North Korea’s foreign minister said US President Donald Trump was on a “suicide mission”.

Ri Yong-ho’s comments to the General Assembly mimicked Mr Trump’s remarks at the UN on Tuesday, when he called North Korean leader Kim Jong-un a “rocket man on a suicide mission”.

Mr Ri added that “insults” by Mr Trump – who was, he said, “mentally deranged and full of megalomania” – were an “irreversible mistake making it inevitable” that North Korean rockets would hit the US mainland.

Mr Trump, the foreign minister said, would “pay dearly” for his speech, in which he also said he would “totally destroy” North Korea if the US was forced to defend itself or its allies.

Shortly before his address, the Pentagon announced that the show of force underscored “the seriousness” with which the US took North Korea’s “reckless” behaviour, calling the country’s weapons programme a “grave threat”.

“This mission is a demonstration of US resolve and a clear message that the president has many military options to defeat any threat,” it said in a statement.

“We are prepared to use the full range of military capabilities to defend the US homeland and our allies.”

The flight follows a week of heated rhetoric between the leaders of both countries – after Mr Trump’s comments, Mr Kim called him “mentally deranged” and “a dotard”.

Mr Ri did not comment on the Pentagon’s announcement.

North Korea has refused to stop its missile and nuclear tests, despite successive rounds of UN sanctions. Its leaders say nuclear capabilities are its only deterrent against an outside world seeking to destroy it.

After the North’s latest and most powerful nuclear test earlier this month, the UN Security Council approved new sanctions on the country.

But speaking at the UN, Mr Ri repeated that the restrictions would not make the country stop its nuclear development.

Meanwhile, a shallow magnitude 3.4 tremor was detected near North Korea’s nuclear test site on Saturday morning, but experts believe it was a natural earthquake.

The quake was recorded at a depth of 0km in North Hamgyong province, home to the Punggye-ri site, South Korea’s meteorological agency said.

The US Geological Survey also said it occurred in the nuclear test area, but added that its seismologists assessed it as having a depth of 5km.

China’s Earthquake Administration said the quake was not a nuclear explosion and had the characteristics of a natural tremor. The agency had initially said it was a “suspected explosion”.

CTBTO executive secretary Lassina Zerbo tweeted that the quake had occurred “about 50km from prior tests”.

“The most probable hypothesis currently is that it is the consequence of the previous event… which could still have further repercussions,” Mr Zerbo told the AFP news agency, referring to North Korea’s massive nuclear test on 3 September.

North Korea – which has recently carried out a series of nuclear tests – has so far made no comment.

In a separate development, China moved to limit the North Korea’s oil supply and stop buying textiles from the country, in line with the latest UN sanctions.

China is North Korea’s most important trading partner, and one of its only sources of hard currency.

The ban on textiles – Pyongyang’s second-biggest export – is expected to cost the country more than $700m (£530m) a year.

Clothing has often partially been made in North Korea but finished in China, allowing a Made in China label to be legally sewn onto the clothing, BBC World Service Asia-Pacific Editor Celia Hatton says.

China also said its restrictions on refined petroleum products would apply from 1 October, and on liquefied natural gas immediately.

Under a UN resolution, China will still be able to export a maximum of two million barrels of refined petroleum to North Korea annually, beginning next year.

North Korea is estimated to have imported 6,000 barrels of refined petroleum daily from China in 2016 – the equivalent of nearly 2.2 million in total for the entire year, BBC reports.