Home Entertainment He Used To Be A Man But Now A Woman, Any Man...
Facebook
Twitter
WhatsApp 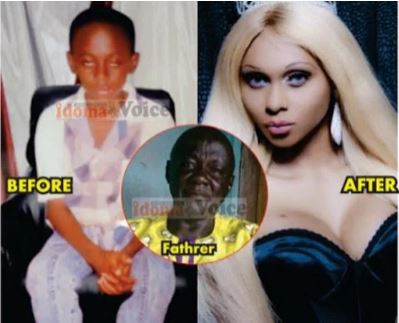 This is an exclusive report by IdomaTV read below;

Born Clifford Oche to the family of Chief Agbo Ella in the dusty Benue town of Otukpo, he was raised in the capital city of Abuja. After two failed suicide attempts he escaped to London many years ago where he has since been living as a woman.

Sahhara Henson, a native of Otukpo Nobi in Otukpo LGA of Benue State, one of the first known Nigerian transgenders, is yet to find the absolute freedom she craves.

Forced to vent her frustration, she blamed religion for a world that has gone awry. In one of her diatribes, she claimed the world has been screwed by religion and she cannot wait to die.

Nonetheless, Sahhara, a former Miss International Queen 2011 continues to face public condemnation. The most scathing attack happened in 2013, when she inadvertently stirred the hornet’s nest by speaking about how happier she is now that her dream of becoming a woman was achieved.

In this exclusive and explosive interview with IDOMA VOICE in his country home, Chief Ella, a former lecturer for the first time opened up on the transformation of his former son, now daughter.

The father of the man-turned-woman, Chief Agbo Ella told IDOMA VOICE that he is proud of the daughter, who was once his son and would welcome her with open arms if she chooses to return home.

He denied ever disowning Clifford Oche, now Miss Sahhara, stressing that he would gladly accept bride price from any man who is willing to take his daughter to altar.

“Provided they can live together, why not? I will accept,” he said when asked by IDOMA TV host, Naomi Oboyi.