Deolu
A woman known as ‘the world’s heaviest woman’, passed away at 4.35am on Monday due to comorbid conditions, including heart disease and kidney dysfunction, according to medical experts at the Burjeel Hospital in Abu Dhabi. 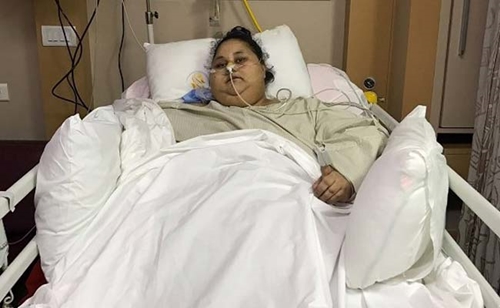 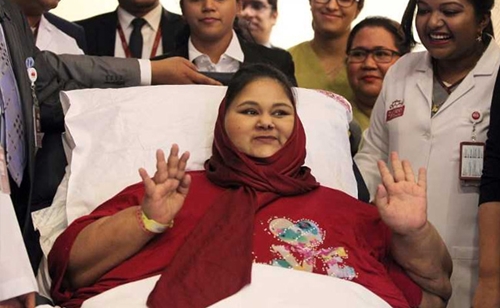 World’s heaviest woman, Eman Ahmed, who came to India for weight-loss surgery and then flew to Abu Dhabi for further treatment amid controversy, has died at 37.
Doctors said she died on Monday morning of complications including heart disease and kidney dysfunction.
Eman Ahmed had been in Abu Dhabi since May. Reports in the UAE media had claimed that she was seen “dancing in her bed” last month.
Ms Ahmed weighed around 500 kilograms when she arrived in Mumbai in February from her hometown Alexandria in Egypt.
She was treated at the city’s famed Saifee hospital by a team of around 15 doctors led by renowned specialist, Muffazal Lakdawala.
She reportedly lost 324 kg during her weight-loss treatment at the Mumbai hospital; she was on a special liquid diet to reduce her weight enough so that doctors could perform bariatric surgery.
When she left, she weighed around 176 kg. Doctors in Mumbai said she would go through physiotherapy in Abu Dhabi’s VPS Burjeel.
Ms Ahmed’s sister had alleged that her treatment in Mumbai had been far short of satisfactory and that the family had been misled. She also claimed in a secretly filmed video that doctors at Saifee were using her sister for publicity.
Doctors, however, dismissed the allegations as “complete hogwash”, alleging that the woman only wanted to extend her sister’s stay at the hospital.
Dr Lakdawala, who supervised her treatment at the Saifee hospital, said the hospital did not charge “a single penny” from Ms Ahmed’s family. “We are happy that we did bring her weight down,” he had said in response to the family’s charges.
Ms Ahmed had not stepped out of her house for more than two decades due to her weight and a stroke that left her paralysed a year ago.