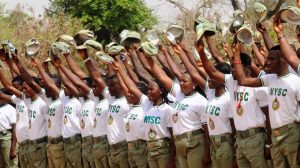 The Minister of Youth and Sports, Solomon Dalung has raised an eye brow at the rejection of Corps members by government agencies. This was in reaction to the refusal of the Budget Office of the Federation to accept a Corps member from Rivers state who had been posted on primary assignment to the office in Abuja.

Dalung stated that said such decisions were not in the interest of youth development and empowerment in the country. He said;

The Minister reminded Government agencies and Parastatals that it is a government policy not to reject corps members posted to their offices.

“The National Youth Service Corp scheme is a creation of the federal government and is intended to involve the country’s graduates in the development of the country. They are posted to states far from their states of origin intended for them to learn the culture of the indigenes in the place they are posted to. This is aimed at bringing about unity in the country and giving them an opportunity to learn about higher ideals of National achievement.”

“Rejecting corps members will add to the profile of unengaged youths which will create tension. Therefore, everybody is invited to join hands to assist our young people through entrepreneurship and empowerment programmes or anything that can gainfully engage them and create wealth for their livelihood and sustenance.”