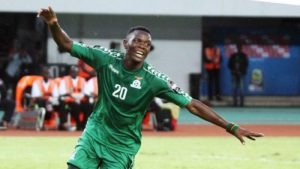 The Chipolopolos of Zambia have ended the quest of the desert foxes of Algeria, winning the game 1-0 in Constantine to move within three points of Group B leaders Nigeria in African World Cup qualifying.

Zambia meet Nigeria next, in Uyo on 7 October, in a crucial tie.

Three months ago, 18-year-old Daka was one of Zambia’s star players as the team reached the quarter-finals of the Under-20 World Cup.

Meanwhile, Algeria – who performed creditably at the 2014 World Cup where they took champions Germany to extra-time – can no longer qualify for Russia next year.

The failure was greeted badly by some fans in Constantine, where the Desert Foxes missed several late chances.

They stay rooted to the bottom of the table with just one point and three defeats from their four games.