10 year-old househelp assaulted by her boss, for eating children’s meat 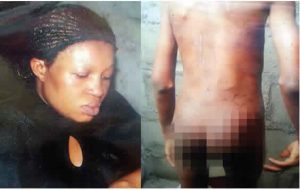 A pregnant housewife, identified as  Juliet Ozoarinze, has been arrested by the Police  for allegedly torturing a 10-year-old girl, Blessing, in Ijesha, Surulere, Lagos State.

The mother of four was also accused of assaulting the victim since she started living with the (Juliet’s) family in July 2017.

She was alleged to have used different objects on her over allegations of being tardy in running errands, not being prompt in answering summons and practising witchcraft.

The suspect’s husband, Kenneth, was reported to have returned Blessing to her aunt, Vivian, on Tuesday, October 17, after the wife allegedly used a knife to cut the 10-year-old in the hand for allegedly stealing and eating the food meant for her children.

She said, “Blessing’s mother lives in Abuja and she has four children, including her. She had been saddled with the care of all the four girls. We thought the couple could assist with Blessing’s education in exchange for helping them with house chores.

“The man suddenly brought the girl back to our house. The woman used a knife to cut her in the hand and the man said he was not happy with the wife. After he left, I saw that she could barely sit and I asked her to remove her clothes. I was alarmed at the extent of her injuries and she told me that Juliet had been torturing her since she started living with them.

“I called Kenneth and asked if he knew about the girl’s injuries and he denied. He came back and was angry to see all her sores. I asked him to pay for the girl’s treatment, but he refused and said he didn’t have money.”

She said after she could not raise money for Blessing’s treatment, her neighbours advised her to approach a human rights organisation.

She explained that after several attempts to convince Kenneth to foot Blessing’s medical bill failed, she reported the case at the Lagos State Office of the Public Defender.

According to reports, when the victim, Blessing was brought to the office, she could not sit due to the extent of her injuries.

She said, “The woman is a housewife and mother of four children. She is currently pregnant with her fifth child. The girl had been cruelly treated and poorly fed by Juliet. Instead of sending her to school as her family promised, they enslaved her.

“When we checked her body, we saw many physical injuries ranging from knife cuts to marks of flogging with wire and other objects. She could barely walk or sit because she had severe injuries on her buttocks and had also been hit on the head and waist with a pestle.”

It was also learnt that the OPD reported the case to the police at the Itire division, and the suspect was arrested.

When queried on what the victim did, the suspect allegedly claimed that Blessing stole her children’s provisions and food.

She reportedly denied beating her with objects.

“The police asked Blessing what made her mistress to beat her and she replied that on an occasion, she was forced to accept that she was a witch. The Divisional Police Officer promised to charge the woman to court at the end of investigations,” a social worker said.

The Director of OPD, Mrs. Olubukola Salami, confirmed the incident.

She said, “We are concerned about the surge in the number of child abuse cases in Lagos State despite legislative measures and several awareness and advocacy mechanisms put in place by the government.

“While OPD will continue to get perpetrators to face justice, we urge all residents of Lagos to be vigilant and report all forms of child abuse in their community.”