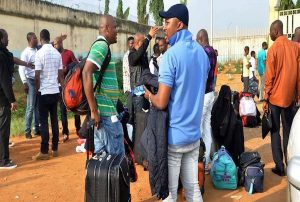 The National Emergency Management Agency has confirmed that almost 257 Nigerians return back home from Libya.

The returnees, who were assisted by the International Organisation for Migration, were received by some officials of NEMA at the Murtala Muhammed International Airport, Lagos.

They were said to have indicated their interest to return home after failed attempts to cross over to Europe through the north African country.

The Zonal Coordinator of NEMA South-West, Suleiman Yakubu, said the Italian government provided the aircraft while the European Union would provide reintegration assistance for the returnees.

Yakubu, who represented the Director-General of NEMA, Mustapha Maihajja, said the Federal Government was making efforts to curtail illegal migration.

“Our youths need to embrace the change mantra of the Federal Government rather than seeking greener pastures where they don’t exist,” he said.

“Nigerian youths continue to leave the country in droves for unknown destinations in their quest for greener pastures. While some fortunate ones have relocated abroad, some unfortunate ones died on the journey, with many others trapped in transit,” she said.