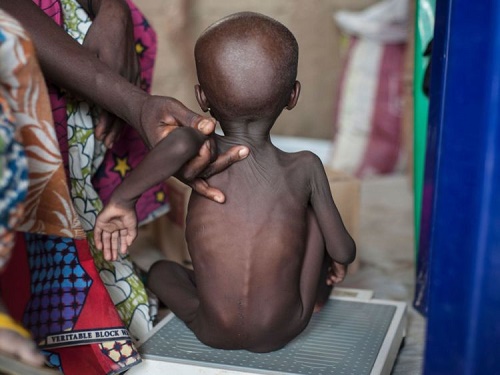 In a new report, the United Nations Office for the Coordination of Humanitarian Affairs (UN-OCHA) says about 3.4 million people need nutrition assistance due to food crisis caused by the Boko Haram insurgency in North-East Nigeria.
In the report for the month of September, UN-OCHA Humanitarian Situation Report revealed that 2.7 million people were targeted for immediate intervention, adding that only 936,200 people were reached with nutrition support within the period under review. The report indicates that three Stabilization Centres (SC) were set up at Damboa, Dikwa and Ngala Local Government Areas to enhance management of acute malnutrition. It says some 60 health personnel were also trained in Borno and Yobe States to enhance operations at the stabilisation centres.
The UN agency added that effective modalities were evolved to streamline the Infant and Young Child Feeding scheme with the Blanket Supplementary Feeding and Emergency Food Distribution programmes to control the scourge. It adds that the UN in collaboration with humanitarian partners had decentralized activities in 8 local government areas of Borno State to combat malnutrition.
The report lists the affected areas as Damasak; Ngala, Dikwa, Bama, Gwoza, Kukawa, Kala-Balge, Gubio, Nganzai and Guzamala. “The progress toward key indicators is on track except for the management of Severe Acute Malnutrition (SAM) with medical complications, which remain hampered by the unavailability of services especially in the newly accessible areas. Lack of access to most areas has been the impediment in providing life-saving nutrition support to those in need. Nutrition activities are limited to few areas where humanitarian actors have access and where healthcare structures are in place,” it stated.
It also points out that about 6.5 million U.S. dollars was required to implement five projects and facilitate smooth running of the nutrition support services in the affected communities. It disclose that a maternal and child health week exercise would be conducted to contain malnutrition in the war ravaged region.
OCHA said that some of the activities line up for the campaign included supplementation of micro-nutrients deficiency, screening and referral of under-5 children. “The campaign is design to help children who were not assisted under the routine exercises to achieve its target”, adding that mobile outreach is critical in the campaign