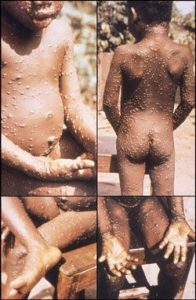 The deadly monkeypox disease have reportedly broken in Rivers State, a neighbouring state of Bayelsa, where similar cases were first reported.

Bayelsa State had earlier recorded cases of the viral disease on Thursday. Thirteen people suspected to have been in contact with the first victim identified with the disease had been quarantined in the state but there has been no death recorded.

A media report on Channels TV said the three suspected cases in Rivers State were reported a day after Bayelsa State confirmed the outbreak.

The Rivers State commissioner of health, Chikere Princewill, had reportedly informed journalists of the suspected cases in Port Harcourt on Friday.

He said all the three cases were discovered in Obio Akpor Local Government Area of the state, at Rumoulumeni, Eneka and Psychiatric Road.

Mr. Princewill said the fluid samples from the suspects, one a 13-year-old, have been sent to the laboratory for confirmation.

According to the commissioner, the boy had been earlier taken to a traditional healer for treatment. He said that although the cases are suspected to be monkeypox cases, there has been no confirmation of the viral disease in the state yet.

Samples from suspected victims have been sent to the World Health Organisation, WHO laboratory in Dakar, Senegal for confirmation.

After the first report of the suspected cases in Bayelsa, the Minister of Health, Isaac Adewole and the Executive Director of the Nigeria Centre for Disease Control, NCDC, Chikwe Ihekweazu had called for calm among Nigerians saying the government is taking the required steps to manage the disease and to prevent further spread.

Mr. Ihekweazu said monkeypox is a rare viral disease transmitted primarily from animals to humans with a limited subsequent person to person transmission.

”The most common animal host are squirrels, rats and sometimes monkeys. symptoms related to the disease are generalized vesicular skin rashes similar to smallpox and chickenpox, fever and painful jaw swelling,” he said.

He advised Nigerians to avoid contact with animals, especially those found dead in areas where monkeypox occurs.