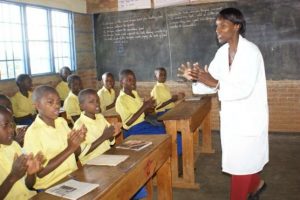 A committee set up by the Sokoto state government have confirmed that thirty-one percent of teachers in the state are not qualified.

But most of the teachers are educated enough to be trained to enhance their qualifications to be in the classroom, the committee stated, according to a statement by Imam Imam, spokesperson to the state governor.

In addition to training those not qualified, the committee recommended the employment of 548 more teachers in order to achieve a teacher/student ratio of 1:40, the standard set for public schools in the state.

These were part of the recommendations of the schools needs assessment sub-committee of the committee on state of emergency set up by Governor Aminu Tambuwal to proffer practical solutions to challenges confronting education in the state.

Presenting the report at Government House, chairman of the sub-committee, Shadi Sabeh, said it assessed 360 schools. He urged the government to act urgently to restructure the imbalance in teachers’ distribution especially between rural and urban areas.

“There’s need to repost 537 teachers from some schools that are over-staffed within the Sokoto metropolis to the many that are lacking teachers in rural areas,” he added.

Mr. Sabeh said lack of ICT infrastructure in schools was a cause for concern, especially because 73% of teachers surveyed lacked computer skills.

“Government must enforce compliance with Federal Government’s directives that all teachers must be registered with the Teachers Registration Council of Nigeria (TRCN). At the moment, only 14 percent of the teachers have the necessary registration.

“In general, there is an ardent and urgent need for a robust capacity building program that will close the training gap among teachers in the state. This is against the backdrop that 90% of teachers surveyed have not attended any form of training, workshop and seminar in the last three years” he stated.

In his remarks, Governor Tambuwal promised to implement the report and put in place other measures to turn around the fortunes of the sector.

He said the government would draw up a new training schedule to give all teachers opportunities for refresher courses.

“Let me repeat it here that no teacher will be sacked from government employ. We will retrain them to update their knowledge. Those who at the end prove untrainable will be moved to other parts of the civil service where their expertise will be required.

“I want to commend the members of the sub-committee for a diligent job. The people and government of Sokoto state will forever be proud of your service,” he added.