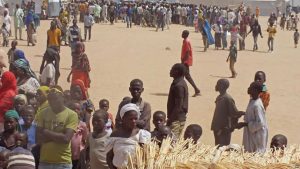 Thousands of people have fled Cameroon’s violence-hit anglophone regions into neighbouring Nigeria in recent weeks, the UN said Tuesday, adding it was preparing to help 40,000 refugees from the unrest.

The UN refugee agency and Nigerian authorities have so far registered some 2,000 Cameroonians who have fled into southeastern Nigeria since October 1, while another 3,000 were awaiting registration.

Even more people are believed to be trapped in forests on the Cameroonian side.

“We are preparing to help up to 40,0000,” UNHCR spokesman Babar Baloch told AFP, stressing though that the number of people fleeing into Nigeria could easily surpass that figure.

French-speaking Cameroon has a large anglophone minority which comprises around a fifth of its population of 22 million.

Resentment has fuelled a breakaway movement that on October 1 issued a symbolic declaration of independence for the putative state of Ambazonia, prompting a crackdown by President Paul Biya’s security forces that left dozens dead and many injured.

The agency warned that the new refugee crisis came at a time when Nigeria and Cameroon were already grappling with one of the world’s worst humanitarian crises.

Some 2.5 million people in the Lake Chad region have already been displaced by the Boko Haram insurgency, which has killed at least 20,000 people since 2009.

In the latest attack blamed on the Islamists, at least 20 people were killed in a series of attacks in Cameroon and Nigeria on Monday.