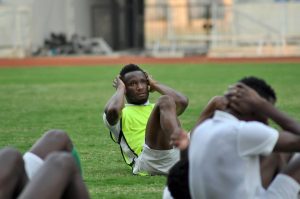 Mikel said, “We know how important the match is; that is enough motivation to go all out and give our very best,” the China-based midfielder told thenff.com on Thursday.

“There are players in this team who have not played at the World Cup. They want to be there in Russia next year.

“The talking will be done on the pitch. I have no doubt we have the quality to achieve victory, but we will not make any mistake by underrating the Zambians.”

The former Chelsea enforcer praised Nigerian fans for backing the Eagles since the qualifiers began.

Mikel said, “We have played four matches in the campaign so far, but this one is the match. We are fully focused and ready. All we want is the usual support and encouragement by everyone involved, including the fans who will turn out at the match venue.”

Meanwhile, Nigeria Football Federation president Amaju Pinnick has asked the Eagles to be calm but clinical in Saturday’s showdown with Zambia.

He said, “The tendency is for teams to get uptight and tensed for this kind of match. I have spoken to them and the approach should be to take full control from the beginning and take the chances that come without being too anxious.

“We defeated Cameroon by maintaining focus and with the team imposing its game and taking the chances that came their way. That should be the approach for Saturday.”