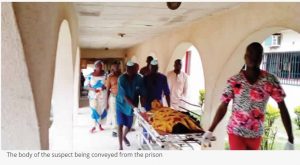 A 28-year-old man, identified as Baba Magani, who allegedly kidnapped his mother and  sister of a member of the Nasarawa State House of Assembly, Mr. Kassim Mohammed-Kassim, has been confirmed dead on Tuesday in the Lafia Prison.

It was revealed that Mohammed-Kassim’s relations were kidnapped by men wielding AK7  rifles on May 7, 2017 at Moroa area of Akwanga Local Government area of the state. They were set free shortly after.

It was learnt that, Magani, who was arrested on charges of armed robbery and kidnapping, had been remanded since July 2017.

He was charged to court alongside two others for allegedly kidnapping the legislator’s relations.

In an exclusive interview with Saturday PUNCH on Friday in Lafia,counsel to the deceased, Mr. Joseph Kigbu, insisted that his client was standing trial for an offence he did not commit.

Kigbu argued that he had filed an application for bail on health grounds and provided a valid medical report but the legislator used his position to ensure bail was not granted.

“The law allows an accused standing trial to be granted bail on health grounds if there is a valid medical report,” he said.

The lawyer said it was when the health of his client got out of hand that prison authorities referred him to the Dalhatu Araf Specialist Hospital, Lafia, where he eventually died after twenty minutes of arriving there.

When asked whether he would take a legal action, he, however,explained that he would consult his client’s family and decide on the next line of action.

But the state’s Controller of Prisons, Mr. Ekwere Ekaneem, told Saturday PUNCH that Magani had refused to disclose the true state of his health.

He said it was when his health deteriorated that he opened up that he was HIV positive.

He, however, maintained that the deceased was referred to the specialist  hospital where he died because the prison lacked the facilities to manage HIV patients.

He then admonished all inmates to always reveal their health status to the authorities to enable them manage their situation properly.

Reacting on the incident, Mohammed-Kassim refuted frustrating the bail application of the deceased, adding that it was a criminal matter.

He explained that the moment the matter went to court, it was beyond him.