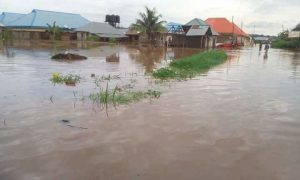 Flood destroyed about 2,000 hectares of farmland across the three districts of Patigi Local Government Area of Kwara State.

This was confirmed by the State’s Special Adviser on Emergency and Relief Services, Duro Mohammed, said this while inspecting the havoc caused by flood in Patigi on Saturday.

Mohammed said rice farms in Lade, Patigi and Sepondi districts cultivated near the River Niger were mostly affected as well as a clinic, a cemetery and a primary school at Gbaradogi.

The governor’s aide, who led the state government’s delegation to the flooded farms, described the damage as devastating.

Some of the affected farmers, who spoke with journalists, lamented that the rice produce had just ripened for harvest before the flooding.

One of the victims, Alhaji Muhammadu Saadu, who is the head of Gbaradogi community, said rice and fish farms were washed away.

Saadu called on the federal and state governments to immediately come to their aid to ameliorate their suffering.

The News Agency of Nigeria reports that the state government delegation also inspected the internally displaced persons’ camp under construction by the Presidential Committee on Flood Relief and Rehabilitation.

Mohammed urged the Federal Government to come to the aid of the state, saying the magnitude of the disaster was too much for the state to bear alone.

He also called for urgent dredging of River Niger and construction of a drain that would permanently secure the rice farms against flooding in the future.

The monarch also suggested that dredging of River Niger and construction of drains would permanently save the community from disaster.

Umar said the flood had increased poverty level in the community, noting that compensation was not enough to ameliorate the suffering of the predominantly farming indigenes.