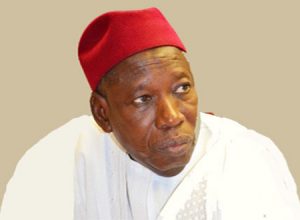 Six new commissioners have been sworn into the cabinet of the Kano State government, this was confirmed by Dr.Abdillahi Ganduje.

According to Ganduje, his administration, like that of President Muhammadu Buhari, has zero tolerance for corruption.

While administering the oath of office to the new commissioners, Ganduje stressed that the change was to reinvigorate and inject new blood into his administration, so as to be equipped to meet the yearnings and aspirations of the people.

The ministries affected in the shake-up included Finance, Budget and Economic Planning, Works and Housing, Commerce and Industry and Justice, while a new Ministry of Special Duties was created.

Also, Aminu Aliyu replaced Haruna Shehu Lambu in the Works and Housing Ministry; Ahmed Rabiu replaced Rabiu Bako in Commerce and Industry; and Ibrahim Muktar, who is the current Chairman of Kano State chapter of the Nigerian Bar Association, is now the Attorney General and Commissioner for Justice, replacing Haruna Falali.

Illyasu Kwankwaso, a former Commissioner for Rural Development under former Governor Ibrahim Shekarau and nephew to Senator Rabiu Musa Kwankwaso, was picked by Ganduje to man the just created Ministry for Special Duties.

While swearing in the new commissioners, the governor explained that the idea behind the cabinet shake-up was to fast-track the business of governance and ensure the sustainability of administration.

“They are still part of us. We commend their hard work and we are very sure that they are still working for the success of the administration and our great party.

“The important issue is that there is a need for planning and new ideas, so that we can move faster and stronger in order to generate new ideas.

They are all agents and vanguards of our great party, the All Progressives Congress. So much is expected from them.”