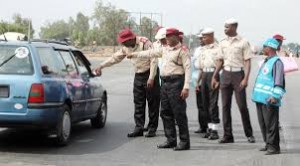 The Federal Road Safety Corps, FRSC, in Plateau, says it has arrested 350 unlicensed drivers during its special patrol on the highways in the state.

The sector commander, Pat Emordi, made this known in an interview with the News Agency of Nigeria on Sunday in Jos.

It was reported that the Command had on October 4 begun a special patrol to ensure unlicensed drivers and unregistered vehicles keep away from highways in the state.

According Mr. Emordi, the affected drivers have been sent to various driving schools within the state, “for proper training that would qualify them to obtained valid licences.’’

“This special patrol we initiated is really yielding positive result for us.

“I assure you, until they are done with their training and the right is done, their vehicles will remain with us.

“Road safety is everyone’s business and we believe that if all of us have the right attitude towards driving, our roads will be safer, “she said.

Mr. Emordi called on drivers in the state to abide by the rules and regulations on driving and keep the roads safe.