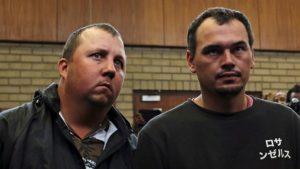 Two white South Africans identified as Theo Jackson and Willem Oosthizen who forced a black man into a coffin have been sentenced to 14 and 11 years respectively in prison.

They had forced the victim, Victor Mlothshwa, into a coffin and threatened to set it alight as Mlothshwa begged for his life.

Mobile phone footage of the incident went viral in South Africa, where 23 years after the end of apartheid racial divisions still run deep.