580 Nigerians Deported From Libya This Week

Deolu
Hundreds of Nigerians who fled the shores of the country for better economic opportunities abroad will be repatriated this week. 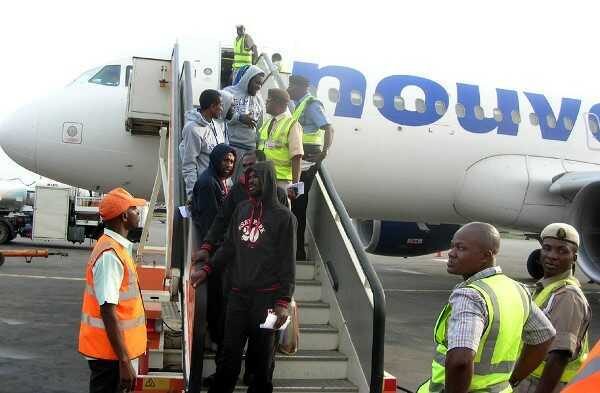 Barely three weeks after 138 Nigerians returned voluntarily from Libya, another 580 are being expected from the North African country, this week.
DSP Joseph Alabi, the spokesperson for the Lagos Airport Police Command, confirmed the development to journalists on Monday in Lagos.
Alabi said that 420 Nigerians would arrive at the Murtala Muhammed International Airport, Lagos on Tuesday via two chartered flights while another 160 would come back on Thursday.
138 Nigerians, on Oct. 3 returned from Libya where they had been stranded en route Europe.
The returnees were brought back to the expression of interest to return to Nigeria through the assistance of the International Organisation for Migration.
Their flight, with Registration No: 5ADM had touched down at the Cargo Wing of MMIA at about 8:05 pm.
The returnees comprised of 65 female adults, two teenage girls and two infants (baby girls) while the male adults were 64, two teenage boys and three infants (baby boys).
Four of the returnees who had medical cases were evacuated upon arrival, for emergency treatment.
They were received by the Nigerian Emergency Management Agency, the National Agency for the Prohibition of Trafficking in Persons, the Federal Airports Authority of Nigeria and the Police.