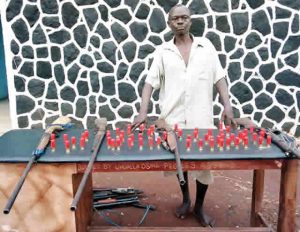 The suspect was apprehended for being in unlawful possession of four single-barrelled guns and 61 live cartridges.

According to the  police, the SARS Annex Commander in Akokwa, Banjoko Idahosa, an Assistant Superintendent of Police, led the operation that led to Chiekezie’s arrest.

The source said, “We got intelligence information about his (Chiekezie’s) criminal activities. He sells guns and cartridges to criminal elements within the Akokwa area.

“On storming his house, a search was conducted around his premises; four single-barrelled guns and 61 live cartridges were recovered. The guns have no licences.”

The police source explained that the arrest of the man was a big breakthrough for the state police command, especially for the Commissioner of Police, Mr. Chris Ezike, who created the SARS Annex to deal with criminal activities within the boundaries of Imo and Anambra states.

“This man is aiding and abating crimes in this part of the state. He has no licence to bear arms or sell them to criminals.

“His criminal activities contravene the Firearms Act, Cap. F28, Laws of the Federation of Nigeria 2004. He would be charged to court to answer for his crimes,” he added.

The suspect, however, told our correspondent that he bought two of the guns in Calabar, Cross Rivers State, and pointed out that while one belonged to his father, he used the other one for hunting games.

Though Chiekezie denied selling of bullets to criminals, he admitted that he did not screen the calibre of people he sold the bullets to.