21st of October turns out the be the birthday of one of the prettiest young Actresses in the Yoruba movie industry, Bidemi Kosoko.

Bidemi,who is the daughter of veteran Actor Jide Kosoko, took to Instagram to reveal she is anticipating her birthday.

She released a new photo in anticipation of her birthday but the caption caught our attention as she revealed she was anticipating her 21st birthday.

Bidemi who is reportedly said to have been born October 21, 1988 allegedly turned 28 last year.

Here’s what she shared: 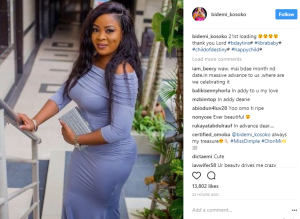