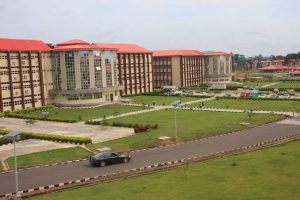 No fewer than 83 persons have obtained first class degrees from the Afe Babalola University, Ado-Ekiti.

This was confirmed by the Vice Chancellor, Michael Ajisafe, on Monday while briefing journalists on the planned 5th convocation ceremony slated for October 21.

He said the institution also plans to treat 2,000 people suffering from different types of ailments as part of its corporate social responsibility to the society.

According to Mr. Ajisafe, ABUAD would graduate 83 first class out of 869 graduands, who would be conferred with bachelor degrees by the institution.

Mr. Ajisafe justified the seemingly high number of first class graduates as a measure of the quality education being offered by the university enabled by uninterrupted power supply and full-residential policy for all students adopted by the founder, Afe Babalola.

He further said that intending patients for the free health services would be treated by experts from Europe, Asia and Nigeria.

“The experts will treat any patient free and they will perform surgery if it is required on any patient and this is on the bill of ABUAD and it is going to be on first come, first serve,” he said.

He said the university will confer honourary degrees on the President and Chief Executive Officer of project CURE, Douglas Jackson, and on the former Executive Secretary of the National Universities Commission, NUC, Peter Okebukola for their contributions to humanity.

“Since we began, ABUAD has proved to be a trail-blazer. In order to add international flavour to the nation’s healthcare delivery, the 400-bed hospital built on 60 hectares of land has entered into partnership with some reputable players in the global health industry such as Abbot laboratories, Aster hospital, Dubai, Project CURE, USA,” he said.