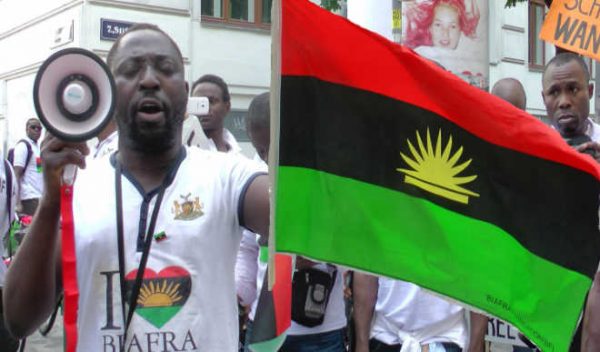 The Indigenous People of Biafra, IPOB, has advised its members in Anambra State not to go out between 6pm November 17 to 6pm om November 18 in a bid to boycott the gubernatorial election in the state.

In a statement by the IPOB spokesperson, Emma Powerful, the group alleged that the Nigeria Government was planning to unleash more killings on them during the Anambra 18th Governorship Election.

The statement said, “This evil plan concocted by the APC government in concert with Nigerian military and supported by unscrupulous South East governors is solely intended to cement their dubious efforts to label the great IPOB a terrorist group. Up till now, all efforts to convince, cajole, intimidate and bribe some countries of the world to designate IPOB a terrorist group has failed.

“They hastily came up with this plan to incriminate IPOB in a violent incident in the hope of turning world public opinion against a peaceful organisation agitating for self-determination through the instrumentality of a referendum.

“IPOB intelligence unit successfully infiltrated the meeting where this bloodbath was being planned. We uncovered the secret venue in Lagos where APC Party stalwarts from the South East and South South geopolitical zones met last week to finalise these murderous attacks.

“At this meeting, they resolved to provide arms and ammunition to a group of men that will be assembled by Ralph Uwazuruike and his BIM group since they need to give the attackers some form of Biafra colouration.

“They are to unleash a coordinated and violent attack against innocent civilians in Anambra State and border towns whilst dressed in Biafra and IPOB colours. These targeted killings of ordinary people are scheduled to commence from the evening of the 17th of November and last till the early hours of the 18th during the planned sit-at-home election boycott in Anambra State. The whole idea is to create the erroneous impression that IPOB is responsible for these attacks which will, in turn, lead to another wave of sustained military attacks on our homes.

“This will inevitably leave thousands of Biafrans dead because the Nigerian government knows that the world has consistently turned a blind eye to killings of civilians in Biafraland do they know they will get away with it. For the APC government led by Major General Muhammad Buhari, this will help convince the United States of America, European Union, France and the United Kingdom that IPOB is a terrorist organisation and to tag it as such.

“It is also on record that USA, EU, France, Britain and many other civilised nations of the world has made it abundantly clear to that IPOB with a registered presence in over 88 countries of the world cannot be regarded by any sensible government as a terrorist organisation.

“This dubious meeting was deliberately held in Lagos rather than anywhere in Biafraland to mobilise APC thugs and those who are not IPOB members to come to Anambra and surrounding states to wreak havoc on peaceful populations.

“We are not surprised that South East governors are still collaborating with Hausa Fulani Islamic North despite their role in instigating Operation Python Dance II which brought, even more, death and destruction to law-abiding citizens in Biafraland. Should Buhari’s APC government decide to go ahead with this plan, the world must hold Nigeria and South East governors responsible.

“Biafrans must be at alert because corrupt politicians in the South East working in tandem with the civilian killing Nigerian military will stop at nothing until they carry out of their devilish plans to implicate IPOB. They have mobilised vehicles, printed fake Biafra flags and IPOB uniforms; they have acquired automatic rifles and guns for this dangerous crime against our people during the election period.

“Biafrans are therefore required to observe a curfew from 5pm 17 November to 5pm November 18, 2017. Anybody found outside within this period will be killed by these thugs and men of the Nigerian Army. Every Biafran, especially those in Anambra and neighbouring states must not venture into Anambra State either on foot or aboard any vehicle.

“The evil plotters promised to give out the sum of 20,000 Naira each to those who volunteer to kill their fellow humans in Biafraland particularly those who would be travelling to or coming out of Anambra State during the election period between 17th and 18th November. As a responsible people oriented mass movement, we are worried about this cruel plan to massacre innocent people once again in Biafraland.

“We are advising every Biafran to stay in their homes and not venture outside from sunset on the 17 of November to sunset on the 18th. The Nigerian Army, Police, Navy and Civil Defence Corps are coming to Anambra State to kill as they did in Abia and Rivers during their illegal and murderous Operation Python Dance II. If you don’t come out, they will not kill you. Stay safe, stay indoors.”