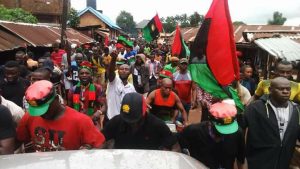 The National Chairman of the People for Democratic Change ( PDC) , Mudi Waziri, has advised the Indigenous People of Biafra (IPOB ) and others agitating for an independent nation to form a political party or join existing ones in order achieve their goals.

The PDC chief spoke on Saturday in Awka, the Anambra State capital, while handing over the flag of the party to its governorship candidate in the November 18 poll in the state, Mr. Peter Chibike.

Represented by the State Chairman of the party, Mr. Isaac Onuka, Waziri said while agitations on contentious issues in the polity were normal as key ingredients of participatory democracy, such agitations must be peaceful, legal and constitutional.

He condemned the call by IPOB for the boycott of the Anambra poll, describing such a move as retrogressive.

He said Biafran agitators should channel their grievances through recognised institutions and not through street protests.

Waziri said, “The National Assembly and several lawful avenues are available to citizens and groups to make a change, seek redress and advance legitimate causes.

“Therefore, we call on agitators to either join a political party, which shares their ideology, or form new parties to push their cause. Street protests cannot give anybody Biafra.”