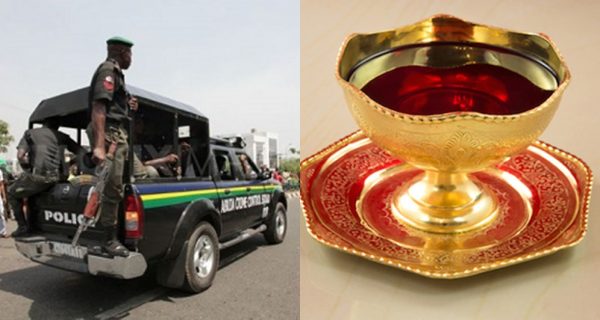 Ebonyi state police command have confirmed the rescue of a Catholic priest, Timothy Nwanja, who was abducted by gunmen in the state.

Also rescued was the cook to the priest who was abducted with her boss.

The priest escaped after his captors allegedly drank Holy Communion wine they stole from his house and slept off.

This is even as the police said that they arrested one of the suspected kidnappers.

Two of the kidnappers escaped but the police vowed to track them down.

According to sources, the cleric, who serves at St. Mary’s parish, was kidnapped by three gunmen at about 8:30 p.m. on Sunday night in his residence.

The police spokesperson in the state, Loveth Odah, an Assistant Superintendent of Police, who conformed the rescue, said that the police acting on tip-off, raided the criminals’ hideout.

She narrated that the kidnappers sneaked into the priest’s room on Sunday while he was having his dinner and took him and his cook away.

She said that the priest’s cook who had gone upstairs to get water from the refrigerator was first captured.

“When the priest heard the loud screaming, he ran upstairs to know what was going on and they also captured him. One of them was familiar with the area.

“They took him away in his own vehicle. They blindfolded him and tied his ears so that he would not be able to listen to their interaction.

“At a point, they separated the cook and the priest. They allowed the cook to go but it was a plot,” she narrated.

Mrs. Odah disclosed that the cleric had jumped out through the window of the uncompleted building where he was taken to after his three captors took Holy Communion wine and slept off.

She said that the criminals had planned to request the sum a N100 million ransom from the Bishop of Abakaliki Diocese in the morning before they ran out of luck.