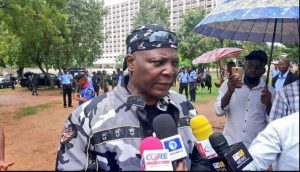 The leader of an activist group,’Our Mumu Don Do‘, Charles Oputa, popularly known as Charly Boy, has said his group would commence a daily protest to force President Muhammadu Buhari to tackle corruption allegations levelled against top members of his government.

Some top officials of the administration including the currently suspended Secretary to the State Government, Babachir Lawal, and recently, the head of the nation’s oil firm, the Nigerian National Petroleum Corporation, NNPC, Maikanti Baru, have been accused of corrupt acts with many Nigerians believing that Mr. Buhari has not been decisive enough in tackling graft in his own inner circle.

A Nigerian senator, Shehu Sani, a member of the president’s party had recently criticised the administration for being soft on corrupt officials of the government but acting quickly on members of the opposition when accused of same offences.

In a statement by the group, Monday, signed by Deji Adeyanju, Bako Abdul Usman, Ariyo Atoye, and Moses Paul, it said it would commence a daily sit-out at the Unity Fountain, Abuja, from Tuesday to highlight the tardiness of the Buhari led government in prosecuting alleged corrupt officers of the government.

The statement explained how, over the course of the last 29 months, several allegations of corruption, mismanagement of public funds and outright looting of the national treasury have surfaced against top officials of the administration with no corresponding response from the government.

Making reference to the recent NNPC saga where the minister of state for petroleum resources, Ibe Kachikwu, accused the corporation’s boss of impropriety and insurbodiantion, the group said the president was deliberately shielding corruption.

It listed other acts that showed the president was abetting criminality.

“The $43 million found in the Osborne Apartments allegedly stolen and hidden by the suspended Director of the National Intelligence Agency, Mr. Ayo Oke is one.

“The mismanagement and theft of funds meant for the welfare of people displaced by the ongoing war against Boko Haram in the North-eastern part of the country by the suspended Secretary General of the Federation, Mr. Babachir Lawal to the tune of N270 million (Two Hundred & Seventy Million Naira) is another one.

“Allegations of bribery to the tune of N120 billion (One Hundred and Twenty Billion Naira) against the Inspector General of Police, Ibrahim Idris, by the Chairman of the Senate Committee on the Navy, Senator Isah Missau.

“Allegations of corrupt enrichment made by the Ekiti State House of Assembly against the Minister of Mines & Steel Development, Kayode Fayemi, to the tune of N40 billion (Forty Billion Naira),” the statement said.

The group noted that Nigerians expected more from the president on these allegations especially his anti-graft personality that ensured his victory at the polls in 2015. He said Nigerians, “are dismayed by the apathy displayed in this regard by the Federal Government.”

“Instead, the reports of the investigation of some of these allegations have been totally ignored by the President. In other cases, these officials seek to use the apparatus of the Nigerian State to silence these allegations and stifle their investigation and prosecution. An example is the application made by the Inspector General of Police before a High Court of the Federal Capital Territory, Abuja, seeking an order restraining the Senate from investigating the allegations of bribery made against him.

“In the light of these disturbing developments and the insouciance of the Federal Government in fighting them, we shall commence a daily sit out at the Unity Fountain, Abuja, from Tuesday October 17th, 2017 to highlight these allegations of corruption against these and other top officials of the Buhari administration and strongly demand that President Buhari takes action against them in line with his anti-corruption campaign. The sit out will commence from 09:00am and will hold daily until the president moves to decisively tackle these issues.”

Charly Boy had led his group in a daily protest when the president was in London for an undisclosed medical treatment, where he spent over 100 days.

One of the protests in the popular Wuse Market in Abuja nearly degenerated into violence, when a pro-Buhari group confronted the protesters. The market was subsequently shut with Charly Boy calling off further protests, and later reopened.

Mr. Buhari returned to the country a few days after the faceoff.