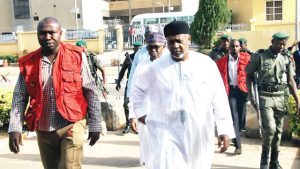 Former National Security Adviser, Col. Sambo Dasuki (retd), on Tuesday has asked the Federal High Court in Abuja to suspend and adjourn indefinitely his trial on charges of illegal possession of firearms and money laundering.

Arguing the application before Justice Ahmed Mohammed, Dasuki’s counsel, Mr. Ahmed Raji (SAN), asked the court to adjourn the trial indefinitely pending the hearing and determination of the ex-NSA’s motion for stay of proceedings filed before the Court of Appeal, Abuja.

Raji contended that his client’s motion was not seeking an order of stay of proceedings which had been barred by section 306 of the Administration of Criminal Justice Act 2015, but said that the application was brought under section 305 of the ACJA which he argued allowed the court to adjourn a trial after a constitutional issue arising from the trial had been referred to a higher court for determination.

Raji was referring to the appeal filed by his client against the ruling delivered by Justice Mohammed on June 15, 2017, granting the prosecution’s application to permit its witnesses to testify behind screen.
Raji said, “In the cause of the proceedings, a very major constitutional issue arose on witness protection and fair trial, under the Constitution and the defendant here has referred the constitutional matter to the Court of Appeal.

“The notice of appeal, Exhibit C which is the vehicle through which the referral was made, particularly in ground 3, states that section 232(3)(b) of the ACJA has been submitted for the test against the provision of section36(4) of the 1999 Constitution.

“On the basis of this referral the court should adjourn the matter.”