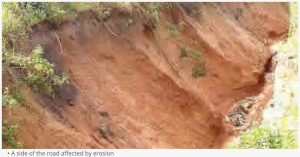 Ibiaku and Nduetong communities in Uruan Local Government Area of Akwa Ibom State have threatened to boycott future elections over the collapse of their only access road to Uyo.

Southern City News learnt that the two communities used to transport their agricultural produce to Uyo quickly and easily through the once easily-accessible road said to be two kilometres away from Government House in Uyo.

A community leader in Ibiaku, Mr. Augustine Udoibit, told our correspondent in Ibiaku on Friday that the indigenes of the two communities were living in fear of the imminent disaster which the road posed.

“Part of the discussion was that they (the communities) may not be able to vote for any government again because the government seems to have neglected them. Government in and government out, these people don’t seem to be recognised, yet they are very close to the seat of government.

“I don’t know how the attention of government can be called to this imminent disaster. If we are proactive, we can nip the disaster in the bud.

“Some of the disasters we see and read about in the newspapers and televisions and in social media, apart from maybe, something like the hurricane, they don’t just happen; they start from somewhere. If somebody is able to stop it at the point it is starting, we may be able to prevent a major problem,” he said.

According to Udoibit, who is also a lawyer, it is not something that is good for a whole local government to be cut off from Uyo. He stated that farmers from the areas can no longer transport goods to Uyo, giving rise to high cost of food items in the capital city.

Udoibit revealed that indigenes from the two communities were now contending with insecurity, owing to the heavy presence of Fulani herdsmen.

He said, “For a whole local government to be cut off from Uyo, it is not something palatable. In the 70s and 80s, people used that road to transport produce from the local communities in Uruan to Uyo.

“What the people are now facing is insecurity as the Fulani herdsmen have taken over the whole of the area. So, if there’s anything the government can do to assist us, it will not only please me, it will add to the achievement of government; it will please the entire community, then the entire local government of Uyo and Uruan because that road connects the two LGAs.”

A resident of Nduetong and an engineer, Mr. Inimfon Inyang, expressed surprise why government had allowed the road that links Uruan with Uyo to collapse.

He explained that the two communities had made several appeals to government to rehabilitate the road when signs of gully were noticed.