Davido has been in the news a lot lately than he bargained for following the death of his friend, Tagbo, who reportedly died of suffocation on his birthday after having an alcohol spree.

His baby mama, Sophie Momodu, who has been away on a Vacay in the singer’s Atlanta home has showed love and support for the singer at this very trying times as the singer has been emroilled in the drama following the death.

Davido’s baby mama who shared a photo of him down with worry on Snapchat, asked him to smile cos God’s got him. See her post below: 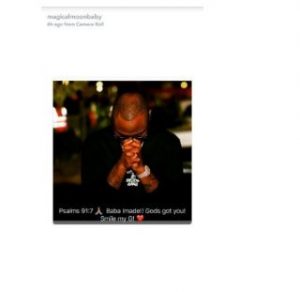 Share
Facebook
Twitter
WhatsApp
Previous articleJude Okoye Defends Davido; Says Is It Now A Crime To Instruct That A Grown Intoxicated Man Get Medical Help
Next article‘If he had gone back to school, he wouldn’t have died’ – DJ Olu’s father Dapo Abiodun
- Advertisement -