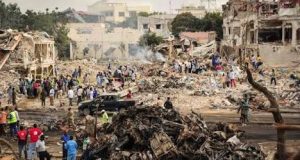 The recent bomb blast in Somalia has increased the death toll to 276, according to official figures.

Somalia’s Information Minister, Abdirahman Osman, said on Sunday on Twitter that around 300 others were also wounded in the explosion at a busy road junction.

“We will observe three days of mourning for innocent victims, flags will be flown at half-mast. Time to unite and pray together. Terror won’t win,” Mr. Farmaajo said in a statement posted on the presidency’s official Twitter account on Sunday.

World leaders have since condemned the attack, considered the worst ever bomb attack in the East African country.

The UN Secretary-General, Antonio Guterres, urged all Somalis “to unite in the fight against terrorism and violent extremism and work together in building a functional and inclusive federal state”.

The Secretary-General, in a statement by Stephane Dujarric, UN spokesperson, commended the first responders and residents of Mogadishu for mobilising to aid during the attack.

Mr. Guterres conveyed his condolences to the bereaved families as well as his wishes for a speedy recovery to those injured.

The Secretary-General’s Special Representative in Somalia, Michael Keating, said that the UN and the AU Mission in Somalia were working closely to support the response by the Federal Government of Somalia and Local Government Authorities.

Mr. Keating said the support by the missions included the provision of logistical support, medical supplies and expertise in the aftermath of the bombings.

“It is a revolting attack both in terms of its intent and impact,” the Special Representative said.

He said that the immediate priority was to support efforts led by the authorities to recover from the attack and help those affected, especially the injured and newly homeless.

“The international community will do everything possible to help the people and government of Somalia to overcome this tragedy,” he said.

The U.S. in a separate statement by Heather Nauert, spokesperson for the Department of State, condoled the victims of the bomb attacks and those injured.

“The United States condemns in the strongest terms the terrorist attacks that killed and injured hundreds in Mogadishu,” the statement read.

“We extend our‎ deepest condolences to all Somalis, especially those who lost friends and family in the attacks. We further wish for a quick recovery for all those injured.

“In the face of this senseless and cowardly act, the United States will continue to stand with the Somali government, its people and our international allies to combat terrorism and support their efforts to achieve peace, security and prosperity.”