Home News Feed Drama As Man Sets His Own Family On Fire
Facebook
Twitter
WhatsApp
In what will come across as a really shocking development, an obviously frustrated man has set his own family on fire. 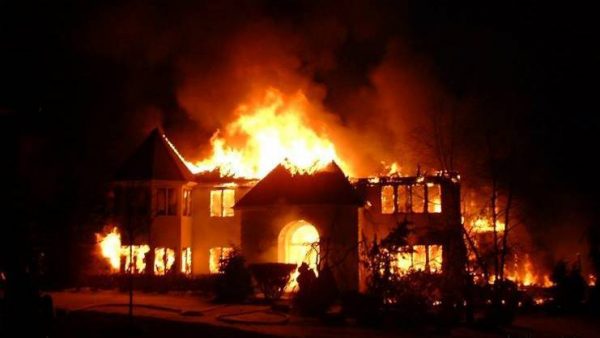 A loan shark was arrested on Tuesday in India by the Indian police after an impoverished labourer burdened with debt doused himself and his family in kerosene and set them alight, killing his wife and two daughters.
According to a report by the Agence France Presse, the man remains in a critical condition with serious burns after self-immolating Monday at a government office in Tamil Nadu state in southern India, an official said.
Sandeep Nanduri, the top local official in Tirunelveli district, said the man had taken a loan of 142,000 rupees ($2,150) earlier this year to start a business but was being pressured to pay more interest.
The labourer, identified only as Esakimuthu, had repaid nearly double the loan but the lender was pushing for around $3,000 more in repayments.
Nanduri said the man was allegedly pressured by police to repay the extra interest, driving him to desperation.
“We have started an investigation over allegations that the police and officials didn’t help the man,” Nanduri told AFP. “A police officer has been transferred and his role is being investigated.”
The lender has been arrested on charges of assisting suicide and breaching laws on charging exorbitant interest, Nanduri said.
Most Indian states have criminalised commercial moneylending. All lenders, both formal and informal, are banned from charging interest rates above 21 percent on loans.
Thousands of low-income Indians, mostly farmers, are often denied loans by banks and rely on unscrupulous lenders for quick cash.
Private lenders charge steep interest rates upwards of 50 percent, locking borrowers in a cycle of debt. Many use threats and force to reclaim unpaid loans.
Hundreds of farmers crippled by debt have committed suicide in recent years, especially in Tamil Nadu where a bad drought put enormous financial pressure on poor families.
Nearly 48 percent of farmers in India took loans from informal sources such as moneylenders and landlords, according to a 2012 report by All India Debt and Investment Survey.