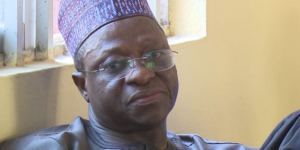 Former governor of Plateau State, Joshua Dariye, on Tuesday has closed his defence in the alleged N1.162bn fraud trial.

Dariye is presently being prosecuted by the Economic and Financial Crimes Commission (EFCC) in a 21-count charge of money laundering and diversion of ecological funds to the tune of N1.162 billion belonging to the state.

Dariye’s counsel, Mr Kanu Agabi (SAN), told the court that they have closed their case and applied for a written address.

“My Lord, I am pleased to inform your Lordship we are closing the case for the defence and we will like to address you,’’ Agabi said.

Mr O. Atolagbe, holding the brief of Mr Rotimi Jacobs (SAN), the EFCC prosecution, did not object to the application.

Atolagbe said that the prosecution will also be grateful to address the court.

Dariye, on September 18, employed Agabi, a former Attorney-General of the Federation, as his new counsel after his lawyer, Mr Garba Pwul withdrew from the case.