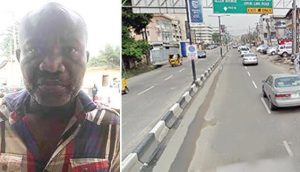 The police in Lagos have arrested a deaf and dumb man, identified as Emeka Uche, for allegedly pretending to be a beggar to steal valuables in firms in the Opebi, Ikeja area of the state.

It was learnt that the Anambra State indigene was arrested on Tuesday by operatives of the Rapid Response Squad through the footages of the Closed Circuit Television cameras that caught him in the act.

It was gathered that Uche would go to a firm with a bag and walk around the office area.

He would reportedly hold a placard with an inscription, ‘deaf and dumb,’ begging for alms.

But as soon as a worker went to another office, he would allegedly sneak in and steal any valuable he could lay his hands on.

One of Uche’s targets, according to the police, was Konical Minolta, a photography firm in Opebi, where he reportedly stole a laptop on July 19, 2017.

He was said to have succeeded in the operation, but was caught by the CCTV installed on the firm’s premises.

“On September 12, he went to a training firm, which is also located in Opebi and struck when he discovered that the occupant of an office in the firm was not on the ground and the office was not locked.

“He stole a laptop and fled. But the CCTV captured his face and the items he stole.

“The case was reported to the police and referred to the RRS for tracking of the suspect,” a police officer said.

Another police source explained that the CCTV footage at the training firm was taken to Konical Minolta for printing.

He said workers at the photography firm recognised Uche in the footage and told the police operatives that they had also been looking for him.

The source said, “He was eventually tracked down and he has confessed to the crime.

“He is deaf and dumb. He would sneak into peoples’ offices and steal laptops and other valuables.

“He led operatives to two men on Lagos Island, who he claimed that he sold two laptops to. But the men denied. Investigation is ongoing.”

The Lagos State Police Public Relations Officer, ASP Olarinde Famous-Cole, promised to get back with comments on the incident.