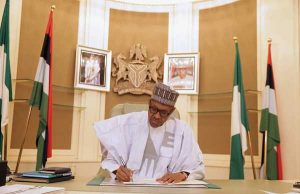 Mr. Buhari has held on to the position of petroleum minister but named Ibe Kachikwu as the Minster of State for Petroleum.

Mr. Falana’s call is coming after Mr. Kachikwu accused the Group Managing Director of the NNPC, Maikantu Baru, of violating due process in the award of $25 billion contract.

In a petition to President Muhammadu, which eventually leaked to the media, Mr. Kachikwu also accused Mr. Baru of insubordination.

In his statement on Sunday, Mr. Falana said it was better for Mr. Buhari to appoint someone else to supervise the ministry.

“Having regard to the enormous responsibilities of the office of the Minister of Petroleum Resources and Chairman of the NNPC Board President Buhari is advised to relinquish the ministerial position in view of his busy schedule and appoint another Nigerian of proven integrity and competence to superintend the affairs of the Ministry.

“If this advice is accepted in good faith and acted upon without any delay it would remove undue pressure on the health of the President and allow him to attend to urgent matters of the state,” he said.

PREMIUM TIMES reported how Messrs. Buhari and Kachikwu held a closed door meeting on Friday over the matter.

Mr. Baru, who is yet to speak publicly on the matter, was also at the presidential villa where he met with Vice President Yemi Osinbajo.

Mr. Falana also, however, called for Mr. Baru’s suspension while calling for an investigation into the matter by relevant agencies including the anti-graft EFCC.

The people of Nigeria were surprised last week to read the embarrassing petition of the Minister of State in the Ministry of Petroleum Resources, Ibe Kachikwu, addressed to President Buhari pertaining to his inability to consult with the President and substantive Minister of Petroleum Resources and the unilateral award of $25 billion contracts by Mr. Maikanti Baru, the Group Managing Director (GMD) of the Nigerian National Petroleum Corporation (NNPC). Although it was reported that Mr. Kachikwu has since been given access to the President the details of the discussions between the duo have been not been made public. However, apart from sanctioning the officers responsible for creating the wide gulf between Mr. Kachikwu and the President the allegation of the unilateral award of contracts worth $25 billion by Mr. Baru ought to be investigated in line with the anti-corruption policy of the Buhari administration.

In order to conduct a thorough investigation into the grave allegations of the reckless contravention of the provisions of the Public Procurement Act Mr. Baru should be placed on indefinite suspension while the presidency should refer the case to the Economic and Financial Crimes Commission. And once it is confirmed that the said $25 billion contracts were awarded without the approval of the NNPC Board they should be revoked while the recent appointment of the heads of the parastatals in the oil and gas industry should be reviewed in line with the Constitution and the Federal Character Commission Act.

Curiously, the presidency has demanded for the minutes of the meetings of the NNPC Board. This demand has confirmed that the meetings of the Board which are statutory required to be chaired by the Minister of Petroleum Resources have not been held as and when due. More importantly, the demand has corroborated that aspect of Mr. Kachikwu’s petition alleging that the powers of the Board have been usurped by Mr. Baru.