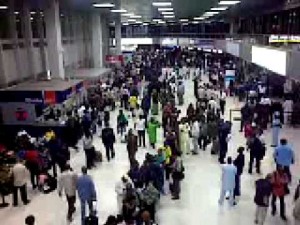 Flight delay and cancellation affected many passengers at the Murtala Muhammed International Airport, Lagos, on Monday, with domestic airline operators blaming it on insufficient aviation fuel.

A News Agency of Nigeria (NAN) correspondent, who monitored the situation at the Murtala Muhammed Airport 2 and the General Aviation Terminal (GAT) observed that only few flights operated on schedule.

A reliable airline source told NAN that the problem was caused by the inability of petroleum tanker drivers to lift aviation fuel from Apapa as a result of gridlock on that axis.

The source noted that the problem, which was more pronounced on Sunday, was, however, gradually abating as some marketers had been able to start trucking products to the airport.

Confirming the development, the media consultant to Med-View Airline, Mr Obuke Oyibhota, said it was a general problem faced by the airlines.

“There is a general scarcity of aviation fuel. We have gotten a way around it to enable us continue our operations during the period, but we don’t know how long it will last,” Obuke said.

He said:”The scarcity is affecting flights to some extent at the moment, but we are still relying on our stock and the arrangement we made with the suppliers.

“However, nobody knows whether it may become more difficult, but for now we are trying to see how we can manage the plans we have on ground to ensure that the impact is only minimal.

Two passengers, Mr John Olateru and Mr Donatus Eze, told NAN that the situation was unfortunate and appealed to the authorities to find a lasting solution to the problem.