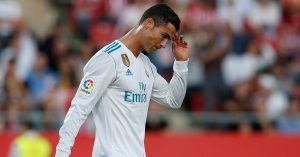 Real Madrid suffered their second defeat of the season as they were stunned 2-1 by newly promoted side 2-1 against Girona on Sunday.

Madrid were making their first appearance in the deeply divided region since a violence marred October 1 referendum plunged Spain into political crisis.

As a reported one million people joined a rally in Barcelona in favour of Spanish unity on Sunday, just over 100 kilometres away in the pro-independence heartland of Girona, the visitors were expected to receive a hostile reception.