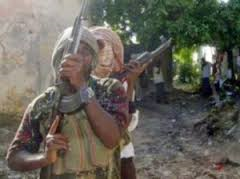 Unknown gunmen have killed two policemen in Kogi State while an expatriate abducted at a construction site along Obajana-Kabba road in Kogi State.

The State Police Public Relations Officer, William Aga, who confirmed the incident, told our correspondent that about 15 gunmen attacked the A .G. Dangote Company handling the rehabilitation of the road, where the policemen were killed.

According to him, Sgt. Gini John died on the spot, while Inspector Ezekiel Negedu died on arrival in the hospital.

Jose Machada, a Portuguese civil engineer was abducted during the raid.

The spokesman also said the state Commissioner of Police, Ali Janga has ordered the deployment of special police units in the area to rescue the victim.