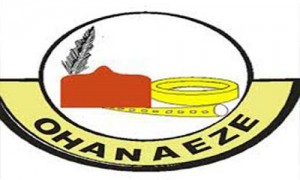 The president general of the Igbo socio-cultural groups, Ohanaeze Ndigbo, at the third inauguration of the state and local government executives committees of the Abia state chapter of , said the restructuring of the polity is and remains the position of Ndigbo in the ongoing debate about the future of the country.

The group’s position counters the demand for independence canvassed by the Indigenous People of Biafra (IPOB).

The group, led by Nnamdi Kanu, has urged the federal government to convene a referendum that would give birth to Biafra, for the South East and some parts of the South South regions of the country.

But, Mr. Nwodo insisted that Biafra is a tall order, given constitutional roadblocks in this dispensation.

“We should forget Biafra and insist on restructuring; there is no Igbo person that is happy with the situation of things in Nigeria, we must seek for peaceful ways of resolving the issues,” he said.

He said while the youth are justified in expressing their anger at the way Igbo are being “marginalized” in national affairs, they should moderate their actions and words.

The presidency had on Monday said the Igbo group could have done more to check the excesses of the separatist group, IPOB.

This was in response to the group’s criticism of President Buhari’s independence speech. The Ohanaeze had criticised the speech saying Mr. Buhari refused to take responsibility for the various challenges facing the country.

However, in his speech on Thursday, Mr. Nwodo said the Ohaneze had urged IPOB, Mr. Kanu and his followers, to tone down their rhetoric and desist from denigrating people and groups.

He said the group was also told that its insistence on Biafra and its call for boycott of Anambra election, were unacceptable.

Mr. Nwodo said making inciting speech is capable of causing crisis which could lead to mass violence in the nation, and added that is pertinent to respect constituted authorities.

He said the firsthand experience he had during the civil war has given him an understanding of the throes of war.

“I urged Igbo youths to desist from activities and comments that could spark violence in the nation. At the moment, what Igbo people need to fight for is restructuring of the nation,” he said.