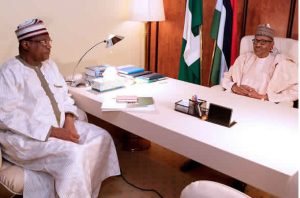 Gov. Ibrahim Gaidam of Yobe State has demanded the refund of at least 30 per cent of the N13 billion the State Government expended on fighting Boko Haram insurgency in the state.

Gaidam made the request when he fielded questions from State House correspondents after a closed-door meeting with President Muhammadu Buhari in the Presidential Villa, Abuja on Monday.

He said already the state government had submitted to the federal government its demand for the refund.

He said the amount, if refunded, would enable the state government carry out some developmental projects including the construction of new hospitals as well as provision of other infrastructural facilities.

“We have not received a kobo in terms of cash. But in terms of materials, food and non-food items, we have been receiving a lot which I cannot tell you precisely in a quantified form.

“But, doing the last administration in Yobe, we took care of the Joint Task Force, a combination of the military, the SSS, the Mobile Police, who were carrying out the war against insurgency.

“We even paid their allowances, all their logistical needs including patrol vehicles.

“We spent huge amount of money in that direction up to about N13 billion during the time of the insurgency.

“We have submitted to the federal government if they could refund even 30 per cent of that amount so that we can use the money on some developmental projects like construction of hospitals.