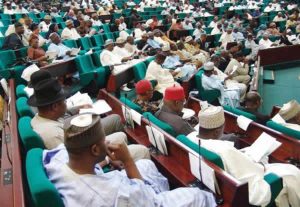 The Tertiary Education and Services committee has been ordered by the House of Representatives to investigate the circumstances surrounding the reduction of the cut-off mark for admitting candidates into tertiary institutions.

This followed a motion by Rep. Hassan Saleh (Benue-APC) on the “Need to Investigate the Reduction in the Cut-off Marks for Admissions into Tertiary Institutions in Nigeria’’ at plenary on Tuesday.

The committee is expected to report back findings within four weeks, was directed to determine whether the cut-off mark reduction would lower the standard of education in the country.

Moving the motion, Saleh expressed concern that the new policy was bound to lower the standard and quality of education from the tertiary institutions.

Saleh said that in spite of the fact that more than 500,000 candidates scored above 200 marks, representing 50 per cent of the total mark, Joint Admissions and Matriculation Board (JAMB) reduced cut-off mark to 120.

He said that the cut-off mark represented only 30 percent of the total examination mark of 400, adding that 100 marks fixed for Polytechnics and Colleges of Education were 25 percent of the overall score.

In his contribution, Rep. Ahmed Pategi (Kwara-APC) disagreed with the motion, saying that the decision taken by JAMB was in order.

Pategi said that all stakeholders in tertiary education agreed with JAMB on the new policy.

He added that it was unfair to deny a child admission into higher institution simply on his/her UTME score even after eleven years of primary education and possession of five credits, including in English Language and Mathematics.

Other lawmakers supported the motion and called for a reversal of the policy, saying universities were supposed to be centers of excellence for learning, hence the need always to admit the best candidates.

According to them, it will be to produce graduates that can compete favorably with their peers anywhere in the World.

Rep. Afe Oluwookere (Ondo-APC) described the new policy as “highly detrimental’’ to the country’s push for economic growth and development.

On their parts, Reps. Henry Archibong, Rita Orji, and Abubakar Chika called for the scraping of JAMB and the UTME.

They stated that lowering cut-off marks for admission into tertiary institutions was a signal that the Board had outlived its usefulness.

The lawmakers also accused JAMB of buckling under pressure from privately owned universities, many of whom were seeking to increase the number of yearly admissions into their schools.

Rep. Abubakar Chika (Niger-APC), a former lecturer at the Polytechnic, said it was highly disappointing that JAMB could succumb to pressure from private institutions, which he alleged had long pushed for cut-off marks to be lowered.

“Let me even open up; this decision was taken because of private universities. They usually need to admit the children of the wealthy, who are not ready to work hard,’’ he said.

Registrar of JAMB, Prof. Ishaq Oloyede, announced that a minimum of 120 marks in the UTME would be required for placement of candidates into universities, while 100 scores were needed for investment into Polytechnics or Colleges of Education.