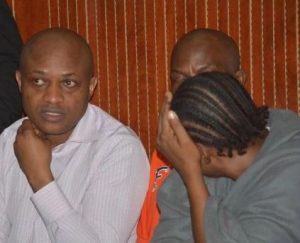 A Lagos State High Court of the Ikeja Division presided over by Justice Hakeem Oshodi on Thursday has  fixed November 3 for the trial of Chukwudumeme Onwuamadike (popularly known as Evans) and his five other gang members.

They were accused of conspiring on February 14 at about 7:45pm at Ilupeju, Lagos, to kidnap Donatus Dunu and collect €223,000 for his release.

At the last court sitting in August, when the defendants were first arraigned before the judge, Evans and Mr. Amadi pleaded guilty to the two counts.

Mr. Nwachukwu pleaded guilty to conspiracy and not guilty to kidnapping.

Ms. Uchechukwu, the only female in the group, and Messrs Ifeanyi and Aduba, pleaded not guilty to the charges.

But on Thursday, amidst a heavy security presence that included the police anti-bomb squad around the court premises, the defendants were unanimous in their plea before the judge – all said they were not guilty of the charges against them.

Before their charges were read, Ike Chika, the prosecuting counsel, informed the court of their intention to bring an amended charge which would require the defendants to take fresh pleas. He added that the amended charge had already been served on the defence.

The statement elicited arguments between the prosecution and defence counsels, with the latter claiming they were just served minutes before the day’s proceedings began and, therefore, did not have the opportunity to discuss with their clients.

“I need a new date to confer with my clients because I have not discussed with them on the implication of the charge as amended,” Olukoya Ogungbeje, counsel to Messrs Evans and Amadi, said.

O. Ajanaku, counsel to Mr. Okwuchukwu, however, urged the court to continue with the case as his client was ready.

“There is nothing new in the charge, just a change in the section of the law that the second charge was attributed to, the charges remain the same and I am ready to commence in the case.”

Ms. Ike, the lead prosecuting counsel, also argued against the move for adjournment saying the defence counsels were only attempting to derail the case.

“According to Section 155(1) of the Criminal Justice Administration of Lagos State, in case of an amended charge, the law does not require any formal application, all that the law needs to do is to take fresh plea to the new charge, there is no material change in the charge, the request is an attempt to derail the case,” the counsel said.

The amended charges retained the accusations of conspiracy and kidnapping but changed the section in the Law on punishments regarding the offences allegedly committed.

Justice Oshodi, after listening to arguments, gave a 45 minute recess to allow the defence counsels confer with their clients on the amended charge, noting that the defendants should be given every opportunity to defend themselves.

Upon resumption of the matter, the accused pleaded not guilty to the charges of conspiracy to commit felony to wit kidnapping under Section 411 of the Lagos State Criminal Laws and also kidnapping.

Mr. Ogungbeje then informed the court that since the defendants had taken a fresh plea, he will be withdrawing a motion he filed earlier to notify the judge of his clients’ intention to change their guilty pleas to not guilty.

The judge said the amended charge had rendered the application unnecessary and then struck it out.

Speaking to journalists after the court proceedings, Mr. Ogungbeje said his clients’ initial guilty plea was due to pressure from the prosecution, the Lagos State government, and the Nigeria Police Force.

“I must say that my client was pressurised by the defence counsel and police to plead guilty but he has now said it today, that he is not guilty,” Mr. Ogungbeje said.

“He has been extorted too and we have called on international organizations to look into his case of financial extortion and molestation of his girlfriend, we would not rush issues but we are right on course.”