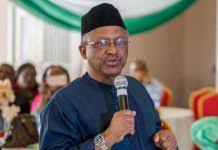 Some leaders of the Peoples Democratic Party, PDP, on Sunday described the death of the party’s Caretaker Chairman in Lagos State, Babatunde Solanke, as shocking.

The News Agency of Nigeria reports that Mr. Solanke died on Saturday at the Lagos State Teaching Hospital after slumping in a hotel in Ikeja.

The deceased had scheduled a meeting with some chieftains of the party in the state on the fateful day.

He has been buried in his hometown, Abeokuta, Ogun.

NAN reports that the deceased was appointed the caretaker chairman in August by the party’s national leadership following the dissolution of the state executive.

The dissolution followed a leadership tussle between two factions in the state chapter.

Mr. Solanke was mandated to conduct congress to elect a new executive within three months.

A former factional chairman of the party in Lagos State, Moshood Salvador, said that he was devastated by Mr. Solanke’s sudden demise.

He said that the deceased sent him a text message at 3.00 p.m. on the scheduled meeting.

Mr. Salvador described Mr. Solanke as a gentleman who was committed to the unity and progress of PDP.

“He was a complete gentleman who was trying his best to unite everyone ahead of the congress.

“He is a peacemaker and a friend of all. This a great loss for the PDP family. It is so sad that we have lost him.

“I pray for the peaceful repose of his soul and the fortitude for the family to bear the loss,” he said.

He said that he had information that Mr. Solanke scheduled a meetings with some chieftains of the party.

He prayed for the peaceful repose of his soul.

The Head of Publicity of the caretaker committee, Femi Careena, said Mr. Solanke’s death was an unpleasant surprise.

He said that it was painful that he died on duty for the progress of the party.

Mr. Careena said that all activities concerning the congress would be suspended for a week to honour Mr. Solanke.

In his reaction, a former Publicity Secretary of the party, Taofik Gani, said that Mr. Solanke was committed to midwifing a progressive PDP in the state.

He said that the deceased was always responsive and desirous that things should be done properly.

“He was a true politician with zeal to reconcile. I pray Lagos would get somebody like him to conclude the caretaker chairmanship,” he said.

“Politicians should learn to be simple and take quest for offices very selfless.

“I pray that the Lord will bless his soul and give his family the fortitude to bear the loss,” he said.

NAN reports that a former Vice National Chairman of the party, Bode George, had on Saturday described Mr. Solanke’s death as painful.

Mr. George said that Mr. Solanke would be missed for his commitment to the party