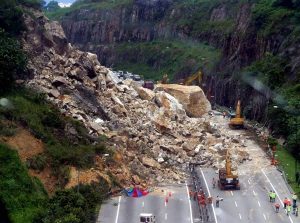 Two workers were found dead and 12 others were missing Saturday after a landslide at a construction site on the popular Malaysian tourist island of Penang, officials said.

Rescuers rushed to the Tanjung Bungah area on the north of Penang after the accident was reported just before 9:00 am (0100 GMT), the fire and rescue department said.

Pictures showed large piles of earth had slipped off a hillside onto the site, where houses were being built.

Two bodies were pulled from the mud and twelve others were still missing, said Anuar Omar, a local police official. He said the victims were believed to be migrant workers.

Many foreigners work in low-paying, physically-demanding industries such as construction in Malaysia.

Penang Island City Council mayor Maimunah Sharif said it was not clear what caused the accident but ruled out the possibility of wet weather as there had not been heavy rains for some days.

The rapid pace of construction on Penang has raised concerns about damage to the environment and that rules regarding safety are not always adhered to.

Tanjung Bungah, north of Penang’s capital George Town, is home to beaches and some hotels, and is popular with expatriate residents.

George Town, a UNESCO World Heritage Site, is a former British colonial trading outpost famed for its mix of architectural and religious influences and vast range of street food.