Deolu
A man who was only trying to kill some spiders with a blow torch has ended up burning down his own house in the process. 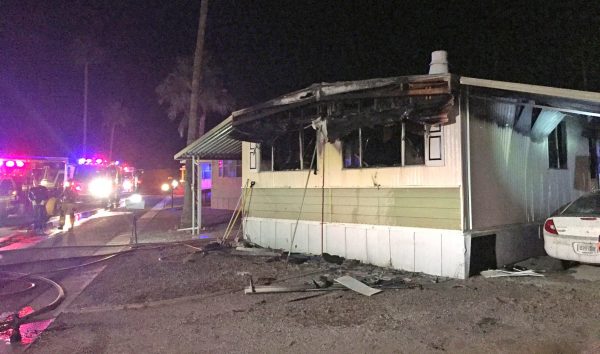 There is nothing worse than a spider infestation, except possibly a blazing inferno engulfing your entire home.
One man found out the hard way the true danger of a blow torch when he tried to destroy spiders in his home using fire.
Instead of simply removing the eight-legged pests, the man burned his house to the ground. He accidentally created a massive blaze that required 23 firefighters to contain it.
The unnamed man, from Tucson, Arizona, US, was suspected of using a propane torch to kill spiders and burn spiderwebs underneath his mobile home.
But instead his house caught fire, with the blaze tearing through the inside, leaving it completely gutted.
The fire, at around 9.20pm local time on Monday night, forced the man and an elderly woman out of their home. Fire crews were called to the blaze and when they arrived, described seeing the woman being carried out of the burning house by her son and several neighbours.
Tucson Fire Department confirmed the woman suffered minor injuries after being treated by paramedics at the scene. It took firefighters 11 minutes to put out the fire, but by that time, the inferno had ripped through the entire home.
Spider mating season, which hits in October, sees arachnids measuring around 8cm invading our homes and getting down to it.
But if you want to stop the spiders boosting their population under your roof, we’ve put together a handy guide on how to spider-proof your home – without resorting to a blow torch.