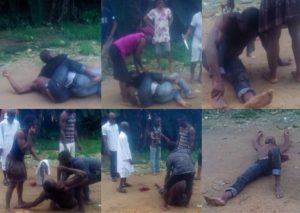 A man identified as Franklin, stabbed by his elder brother at their resident, along Okpu umuobo road, Aba, Abia State, for supporting their sister’s decision not to greet his (the elder brother’s) wife.

According to Omune, an eyewitness, trouble started after their younger sister refused to greet the the elder brother’s wife, prompting him to question her. Franklin, however, tackle him for trying to force her to greet his wife.

The resulting argument degenerated into a scuffle. The elder brother later brought out a knife from his pocket and stabbed Franklin on the chest. He went ahead to pin him down as he continued bleeding. Onlookers eventually separated them and took Franklin to the hospital.