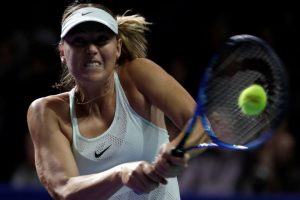 Former World Number one, Maria Sharapova was defeated in the first round of the Kremlin Cup tournament 7-6 6-4 in Moscow by Slovakia’s Magdalena Rybarikova on Tuesday.

The former world number one had on Sunday won her first title since serving a 15-month doping ban when she triumphed in the Tianjin Open.