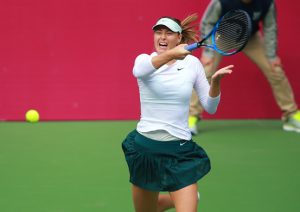 The 30-year-old Russian, playing on a wildcard in the seventh tournament of her comeback, hit top gear as she swept aside the Chinese third seed in one hour, 18 minutes.

In front of a large home crowd, a businesslike Sharapova broke four times and conceded zero breaks of her own before wrapping up the semi-final with a clinical crosscourt forehand.

In Sunday’s final — her first since she won the Italian Open in May 2015 — she will be the red-hot favourite against 102nd-ranked Belarusian Aryna Sabalenka, who beat qualifier Sara Errani 6-1, 6-3.

Sharapova has had a stop-start and injury-hit season since her controversial return at Stuttgart in April, following her ban for using the banned substance meldonium.