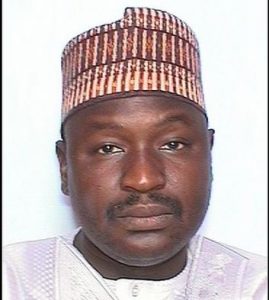 The lawmaker representing Bauchi Central Senatorial District, Isa Misau, on Wednesday open a can of worms on the crisis between him and the Inspector General of Police, Ibrahim Idris, saying the IG gave two Sports Utility Vehicles to the wife of the President, Aisha Buhari.

Misau made more allegations when he appeared before the Senate Ad Hoc Committee on Investigation of Various Allegations Levelled Against the Police, the Inspector General of Police and the Police Service Commission.

According to Misau, details of how Idris gave Mrs. Buhari the two SUV were contained in the documents the police boss submitted to court in the suit instituted against him by the Minister of Justice and Attorney General of the Federation, Mr. Abubakar Malami, on behalf of the Federal Government.

He said, “I still have some contract papers that the IG himself submitted to the court, where the First Lady through her aide-de-camp requested a Toyota Hiace and a Sienna jeep. The same day that the ADC wrote, the IG minuted that she should be given two jeeps. And it is not part of the appropriation. If you look at the appropriation, there is nowhere they said the First Lady should be given two jeeps.”

Members of the panel, however, asked Misau to clarify who the “First Lady” was as she could be wife of the president or a governor.

The lawmaker replied, “The letter came from the ADC to the wife of the President. The most unfortunate thing is that even in the letter, the ADC wrote that they wanted the vehicles for her private engagements; they wrote that they wanted Sienna and Hiace and the IG said they should be given two jeeps. And he supplied the document to the court.”

When contacted on the telephone, the Director of Information to the Wife of the President, Suleiman Haruna, said he had no information on the matter at the time.

He promised to make enquiries and get back to our correspondent.

Haruna has yet to do so as of the time of filing this report.

The IG also did not respond to an SMS inquiring about his alleged donation of two jeeps to Mrs. Aisha Buhari.

Misau also criticised the leadership of the Lagos State Police Command as an example of how the IG was allegedly involved in favouritism. He alleged that the current Acting Commissioner of Police, Edgal Imohimi, was posted to Lagos State because he was a classmate to Governor Akinwunmi Ambode.

“A recent example is the present CP Lagos, who is a junior DCP to two other DCPs, but was given Acting CP and posted to Lagos. These acts of favouritism have eroded discipline in the force, which is the backbone of any successful organisation.

“The reason why they took him to Lagos was because he is a friend to the Governor of Lagos State because they were in school together or because they studied a course together.”

He added, “The IGP posted a Commissioner of Police who for the past 17 years has not worked or served in a police formation to take charge of a state. This officer, who was a former Police ADC to the late former Governor (Diepreye) Alamiesiegha and also served under former President Goodluck Jonathan, is now the Commissioner of Police, Adamawa State.

Misau further alleged that the retirement date of the Police boss had been manipulated.

“The expected date of retirement of the IGP was fraudulently doctored on the Staff List of Senior Police Officers from 3rd January to 15th January, 2019,” he said.

Misau added, “I have a copy of the Staff List of when he became IG and I have another one of when he was an Assistant Commissioner of Police, which show that the dates are different.”

The lawmaker also accused Idris of awarding contracts worth over N2bn to a Peugeot car dealer to acquire Toyota cars.

He said, “In the papers the IG submitted to the court, I saw one Kaura Motors. Kaura Motors deals in Peugeot cars but the same day he was given two contracts: one of them is N1.2bn, the other one is about N1.5bn, to supply Toyota vehicles. How can you give a contract to somebody who is a dealer in Peugeot to supply Toyota?”

The senator also made reference to an earlier probe of the IG by the House of Representatives, which indicted the Police boss for alleged diversion of funds in the 2016 budget of the security outfit.

He said, “The IGP is alleged to have diverted the funds provided under the 2016 Appropriations Act for the acquisition of Armoured Personnel Carriers to purchase of luxury cars without virement; and that he essentially runs the police like a personal property by applying police resources and valuable assets to personal use by his children and close associates.”

The senator buttressed his earlier allegation that the police under Idris’ leadership were being paid for security services to organisations and individuals.

Misau urged the panel to ask the Central Bank of Nigeria to furnish it with the statement of a “GL Account,” which, according to him, is meant for bank managers from where they draw money to run their branches.

“You will see the kind of money they are paying every month from that account,” he said.

He added, “Apart from that, the CBN Governor (Dr. Godwin Emefiele) around June and July of this year directed all commercial banks to give money to police in hundreds of millions – every commercial bank. That money runs into billions.”

But attempt to speak with Acting Director of Communication at CBN, Mr. Isaac Okoroafor, on this allegation proved abortive, as calls to his mobile number rang out.

Misau told the lawmakers that he had had a cordial relationship with Idris.

“All of a sudden, for the IG to start saying that I am a deserter; he just took it personal because of incompetence, because he does not know how to handle the situation. I don’t have any issue with the IG,” he said.

However, the police spokesman, Jimoh Moshood, could not be reached for comment as he did not respond to calls and SMS.