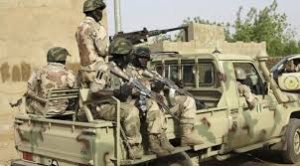 A barge laden with 456,600 litres of suspected illegally refined Automated Gas Oil (AGO) have been arrested by troops of the 4 Brigade, Nigerian Army participating in the on-going Operation Crocodile Smile II.

This was contained in a statement signed by Mohammed Maidawa, Assistant Director, Army Public Relations, and made available to the News Agency of Nigeria (NAN), Benin on Sunday.

Mr. Maidawa said the arrest was in a bid by the army to checkmate the activities of illegal oil bunkering and other forms of vandalism.

He said the arrest was made during a routine patrol following a tip off on suspected oil bunkering activities in Yokri, near Warri, Delta.

He said the troops intercepted a tug boat pushing a barge laden with the suspected illegally refined petroleum product.

He said the intercepted barge had eight out of its 12 apartments filled with about 454,600 litres of the illegally refined AGO.

He said that preliminary investigation was already in progress and suspects would be handed over to relevant security agencies for further investigation and prosecution.

He said in the statement that items destroyed in the camp included three large storage facilities, dug out pits containing substances believed to be illegally refined products, cooking ovens and other bunkering materials.

“While flagging off the Exercise Crocodile Smile II, Friday, in Sapele, the General Officer Commanding 2 Division, Nigerian Army, Ibadan, Chukwunedum Abraham, charged the troops to ensure that those who sabotage our economy, destructs pipelines, illegal refineries and other vices were completely deprived from carrying out such activities.

“He further said that our water ways must be kept clear of pirates and other criminal elements so that those who carry out their legitimate businesses can do so without any interference”, Maidawa said in the statement.