Niniola unveils Cover Art & Tracklist for Debut Album “This is Me”

From Drumroll Records comes the debut album of Nigeria’s own Queen of Afro House Niniola, “This is Me“.

Niniola who has had a Great year so far with global hits like “Maradona” and now “Sicker” is here with her debut album.

Having been in the music industry for a little over 3 years with several awards to her name, Niniola thought it necessary to put out this beautiful body of work.

Niniola cuts across different parts of the world and different styles of music on this project, therefore, we’re sure we won’t be disappointed.

In her own words:
We decided to call the album “This is Me” because I wanted my fans to experience the different sides of me, so they get to know that Niniola is not just the Turn up girl but also that girl who can jump on any beat” 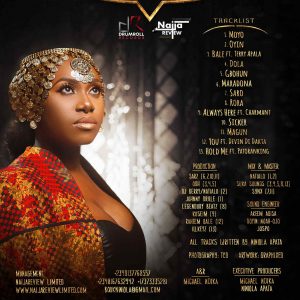 If You Are Fine, Have Sense, Says Solomon Buchi As He Dumps Beverly Iynaya

Popular feminist, Solomon Buchi has announced that he is done with actress Beverly Iynaya and added that anyone with sense and money can shoot...
Read more

Media personality, Toke Makinwa has taken to Instagram to regret her choice of outfit after she suffered wardrobe malfunction. The actress had innocently shared photos...
Read more

Be Whatever You Want, But Don’t Be Stupid – Wizkid

Nollywood actor, Ernest Asuzu has confirmed taking to the street to beg for alms following a video which went viral after he was spotted...
Read more
- Advertisement -